The Schwarzwaldstadion in Freiburg, idyllically situated on the Dreisam, far from meeting the requirements of capacity and comfort of a Bundesliga. Functional description of services - new stadium Freiburg. The city of Freiburg and the SC Freiburg e.V. therefore have decided to jointly create a new Bundesliga capable stadium with multifunctional usable grandstand in Freiburg. The new stadium, which will be built near the exhibition hall and airfield, will be used extensively for the FC's play, training and business operations.

The new construction of the stadium is a big step, both for SC Freiburg and for the city as a Bundesliga location. The stadium construction forms the basis for the economic and sporting future of the club.

The construction is accompanied by great expectations: taking into account a functionality perfectly matched to the game, training and administrative operation and the economic optimization within the scope of the given investment. Budgets should embody the stadium values and spirit of football in Freiburg and symbolize the close partnership between club and city.

With this in mind, we developed a concept in the Design and Build Competition, which in its entirety and configuration clearly stands out from the rectangular stadium types of the younger generation.

The urban setting of the stadium creates generous forecourts in all tribune sections. The geometric shape with its curves and oval elements sets the stadium clearly apart from the environment. Due to the modern, functional and dynamically shaped façade, conferred the stadium an elegance atmosphere that stands out clearly in their effect in stadium construction. 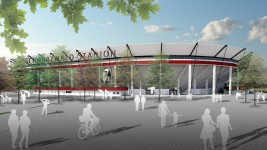 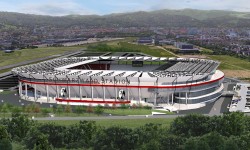 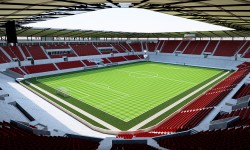 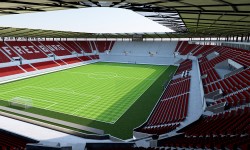 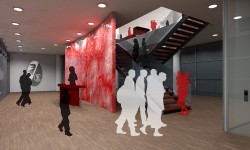 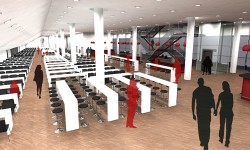