The sports complex of the Polonia Warszawa Football Club was designed on the basis of the existing sports facilities established in 1911. The project assumes the preservation and modernization of the existing main building of the Polonia Sports Club Stadium, the construction of a stadium capable of holding 15,500 spectators, a multifunctional hall and a Sport Support Center.

The new Polonia Warszawa stadium consists of four covered grandstands that can accommodate over 15,500 spectators. In the corners of the stadium there are towers with sports sections offices, conference rooms and media work space.
In the underground part there is a football team facilities, facilities for the Youth Polonia Sports Club, sports section rooms and technical rooms. The building under the supervision of the conservator housed a business and VIP zone. On the ground floor there is also a cloakroom and sanitary facilities for the existing sports hall and swimming pool.

The multifunctional hall intended for playing basketball, volleyball and handball games can accommodate between 1200 and 1010 spectators. It is equipped with the necessary cloakroom sanitary facilities and rooms necessary to supervise the events.

The Sport Support Center in its shape refers to the neighboring building of the multifunctional hall. The object is in itself
physiotherapy rooms, martial arts rooms, fitness club and gym. The ground floor was entirely dedicated to the gastronomic function, while on the first floor there was a commercial function intended for sports stores.

The exit from the underground car park directly to the courtyard is done by vertical communication located in the sports hall building and the Sports Support Center. 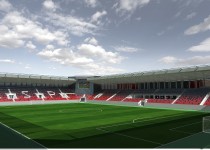 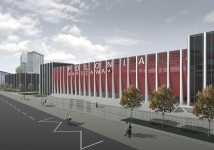 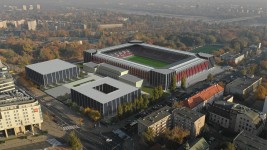